I haven’t posted lately about stuff I’ve made in an effort to be frugal around my home. I’ve been too busy making body scrub and soaps for my new business, ‘Something Lovely’. However I still am finding new things to try. Today I made homemade deodorant for the first time. The recipe I used called for 3 Tbsp. coconut oil, 2 Tbsp. shea butter (I love that stuff!) and 5 Tbsp. Baking Soda, if you have access to Arrow Root you would use only 3 Tbsp of baking soda and 2 of the arrow root…but I didn’t have any arrow root on hand. You could also use essential oils so I used “Baby Rose”. I haven’t tried it yet so I can’t say yeah or nay…but I figured it was at least worth a try. You melt the oil and butter in a glass mason jar while sitting in some water in a sauce pan on the stove. Then you add the baking soda and essential oil. Mine is sitting in the fridge right now to see if it sets up and becomes a consistency that will feel right.

I’ve also recently used a toilet bowl cleaner that I thought worked great. It was 1/4 cup baking soda, 1/4 cup borax and 1 cup vinegar. Put directly into toilet and let sit for at least 30 minutes then scrub as you would normally do. (I’ll be honest, I forgot about it after I put it in and so it sat for several hours…but hey, no damage done and it worked great!)

I’ve been busy making cold pressed soap lately. So far I’ve made Almond Biscotti and Chocolate Espresso. They both smelled divine. I’ve already cut the bars for the first and they are curing. Just in cleaning up afterwards some of the soap got on my hands and wow, I couldn’t believe how amazing it is. Pure luxury soap!

In the next two weeks I plan to make 13 other varieties.
Lilac

A basic 4 oil soap with no scent

Yesterday while biking I was thinking about this blog and my other blog one life well lived and thinking more about combining them. I kept thinking about “The road less traveled”. It’s not an original thought. I realize this. But as I was biking yesterday and traveling a new path that I’ve never traveled before I realized it was highly symbolic of where I am in life right now. I’m still letting the idea percolate in my brain…but I know that’s at least the direction in which I’m heading…if not the exact words.

As I biked yesterday I realized, it’s so important to do new things. It was invigorating to take a different trail and see different scenery. And it’s important to commit far enough that turning back is not an option. By the time I had biked 10 miles in I realized…ok it only makes sense to keep going and not turn around. I was committed. I think the same principle holds true in life. We too easily turn back and give up. We need to burn a few bridges behind us once in awhile to force ourselves to keep moving forward, otherwise it’s too easy to go back.

I honestly believe that one of the best things a newly married couple can do is move away from their parents at least for a year or two. You can still go visit…but daily access is not good. For my husband and I…it forced us to work out our own issues without running to mom and dad. I think it’s the same with the self employment thing I’m trying to do. I’m all in. There is no real turning back. I have a safety net…I can go back to teaching in a year…but I’m extremely motivated to make this work. Nothing in me wants to just turn around and go back to how things were. So I keep pedaling…literally and figuratively.

This is what I’ve discovered with biking…as long as you keep pedaling, even if you go down routes or paths you didn’t plan on, you will eventually reach your destination. Take a break once in awhile, get some water, eat a snack and then get back on and keep pedaling. Yesterday I biked 31 miles and it felt really good.

I’m hoping that in a year’s time I will be able to say the same about my two businesses I’m working on. Going Solo and Something Lovely.

I never dreamed that I would be standing in my kitchen with a long sleeve shirt on, long pants, socks and closed toe shoes, with goggles on my face, gloves on my hands and arms and a mask over my nose and mouth monitoring the temperature of four different oils put together and a mix of lye and distilled water to try and get them both to the same temperature so that I could then combine them, blend them, add essential oils and oatmeal and pour the whole thing into a mold to make  bars of soap.

Maybe you’ve done it or maybe you’ve wanted to do it…but it was honestly not even on my radar until a couple of weeks ago.

Last night I held an open house for my body scrub business called “Something Lovely”. It’s official now. I even have the business cards and a Facebook page to prove it 🙂 No one came. It was short notice. Christmas and gift giving is still far away…but it was worth a try and I’ll try again next week. However, as I sat here by myself I decided it was time to for new adventures and I decided I would go for the whole bars of soap thing.

In the books they warn you repeatedly about lye and how dangerous it is. It appears that it can be something that when not handled right can be quite volcanic and explosive. I wasn’t really in the mood to screw that kind of thing up. I measured each oil and ingredient precisely. I got my stove going and an ice bath going for the oils and for the lye mixture. I used this handy dandy temperature thing where you just push a button as you point at the substance that you either want to cool or heat and it would give a read out of the temperature in the container, works pretty good. When they were both at 110 degrees I blended them together and it didn’t take long at all for ‘trace’ to be reached. Quite amazing how the whole thing solidifies really. By tonight I’ll be able to take it out of the mold and slice. The bars will then sit on baking racks that I’ve set up over my refrigerator to ‘cure’ for the next 4-6 weeks. It’s not a process that is for the impatient!

If I could’ve been a fly on the wall last night and watched myself I think it would’ve been kind of comical and utterly fascinating to realize how much my life has changed.

Last night I talked with my youngest about this blog and another blog I write on called “Onelifewelllived”. They used to seem so separate to me. On this one I would write about sabbatical and all last year, my count down towards sabbatical and how my life is changing. On the other blog I would write about story and what matters in a good story. I would encourage people to tell their own stories in some form or fashion. I wrote about my own story and the parts of it that I thought I were doing well, or the parts where I knew I needed improvement. I’m finding that these two blogs are starting to interweave quite a bit and my off the ride is bleeding into my one life well lived. Life is fluid that way. Any time we try to keep things in separate categories they have a way of bleeding into each other.

I’m telling you this because…I have a feeling it won’t be long until I take my one life well lived blog and merge it with this off the ride blog and come up with one new blog out of the process. If I do make that move…I’ll let you know. It just seems like that’s the direction I’m going in.

Blogs kind of have a life of their own. I’ve written on five different blogs over the past 7 years and I find that they have a way of growing, changing, ending, and starting. I try to be aware of the process as it happens. Creativity is all about following the idea at the time.

I have started a Facebook page for ‘something lovely’ so if you want to look it up and like it that would be awesome. And definitely if you’re interested in body scrub or hand made soap, I’m becoming more and more your girl. I’m still trying to work out the shipping part of the equation. Today I’m going to try UPS and see how much that seems to be. After that I’ll probably experiment with Fed Ex.

Have a lovely day! I’m headed out for a bike ride…it’s been too long.

This week has been about something that was not on my to do list a month ago. Not even on my radar in any way shape or form. It’s been about starting a body scrub business out of my home. Tonight I’m holding my first open house at my house to show off the work I’ve done and give opportunity to anybody who might be interested to come by and shop from 6-8pm.

When I started this it just started by me making a DIY project at home for myself and my girls. I had no intention of starting a business doing this, in fact I was more interested in making bars of soap. But after using the scrub…I realized it’s really good stuff. I liked it…my teenage girls like it…win-win. I started to realize that if I made up jars of it, it would make a really nice gift, reasonably priced but attractive. This began a quest of finding the right ribbon, tags, jars, brown sugar, granulated sugar, epsom salts, cane sugar, and a bajillion different scents. The process has involved traveling the area going to five different Target stories, Walmart, and ordering various other things online. It’s been a little consuming honestly. My home is kind of showing that reality.

But…here it is. I have 108 jars of 20 different scents made up. I’ve already sold six and passed along 6 to my family to try out. And I’ve got a future order to fulfill…but otherwise these jars are open for the purchasing. If you live in the area feel free to come by on Wednesday nights from 6-8pm and I’ll have my sunroom laid out with all of my jars and scents of body scrub to choose from. Small jars are $6 and large jars are $10. I’m looking into shipping but so far due to the weight of these jars, the shipping is quite high. I shipped 3 small ones today and it cost me $12! I’m hoping to find something more doable in the near future.

Here’s what I have to offer… 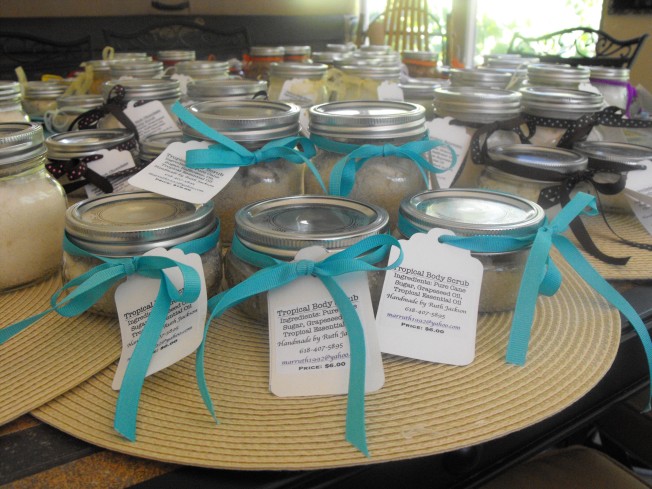 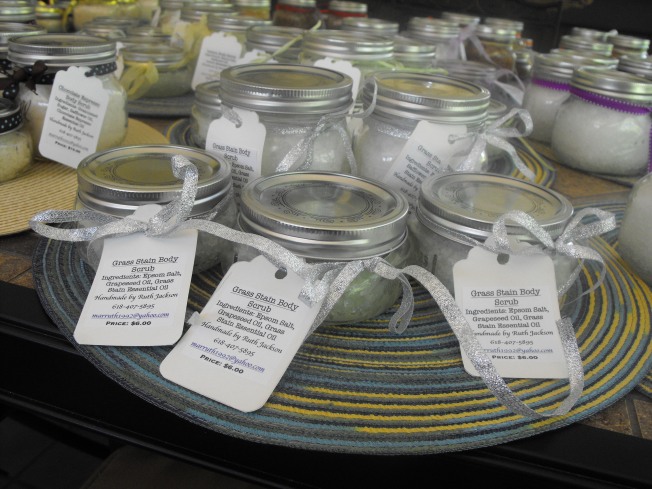 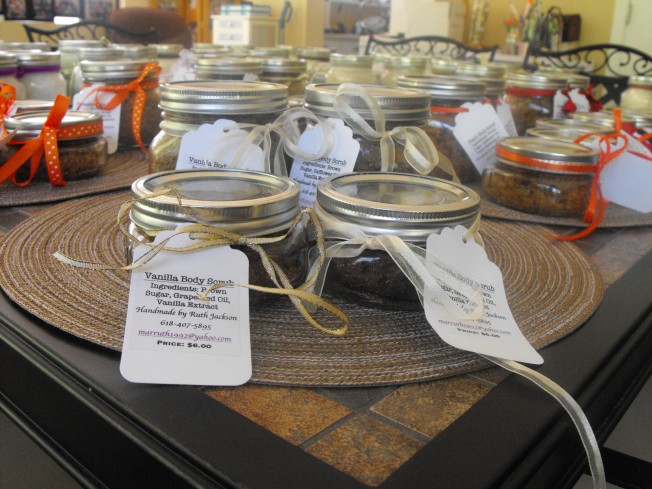 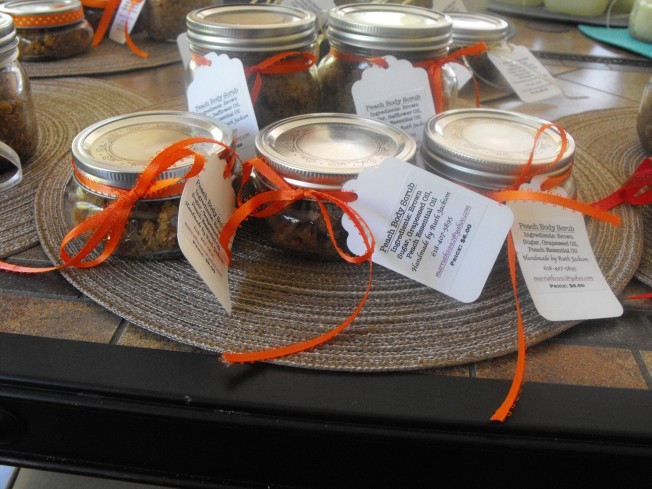 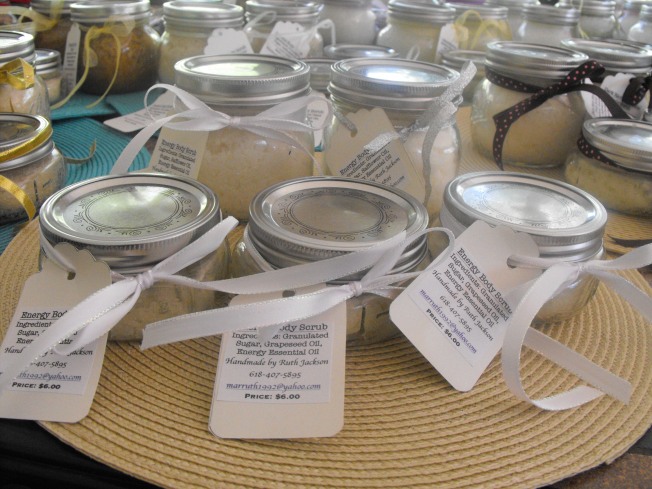 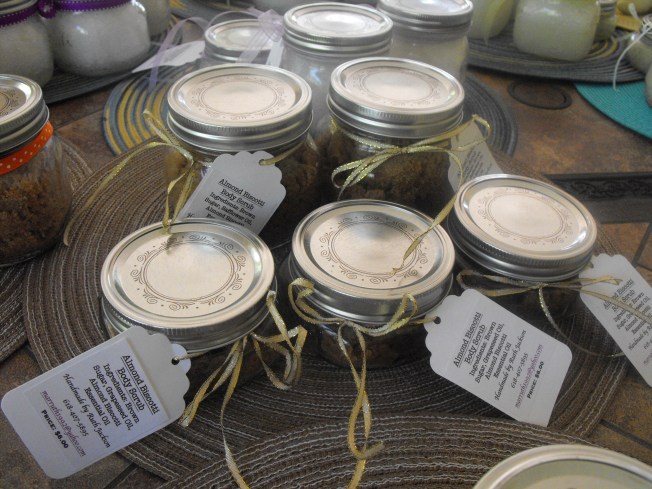 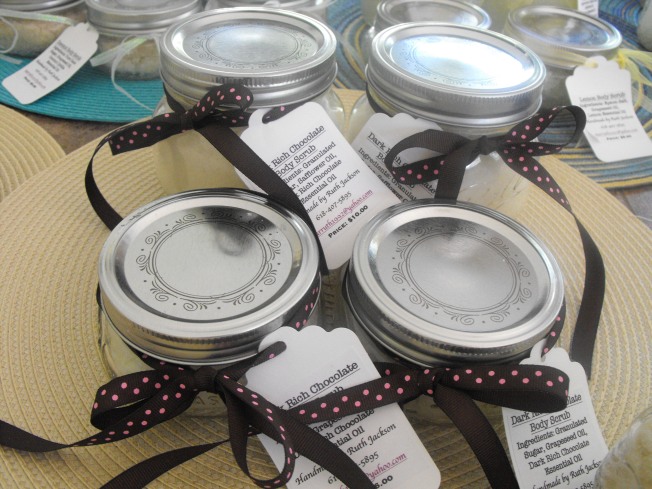 There it is…all 20 scents ready to go.

Create the soundtrack of your life through piano and voice lessons designed specifically for you.

The journey of Matthew Pierce as he paddles America's Great Loop

Pictures with a side of words

Let light shine out of darkness

Serving the lost, abandoned, and neglected for the glory of Jesus Christ!

Letters to Lead You Home

Letters written from a momma to her two teenage daughters.

Where music and writing converge.